Daftar Isi Artikel
At the junction of Argentina and Chile, there is a region called Patagonia. Because of its geographical location, it is called “the end of the world”. Although it is a desolate land, the plateaus of the mountains and rivers attract many outdoor enthusiasts and climbers to realize their hobbies and dreams. 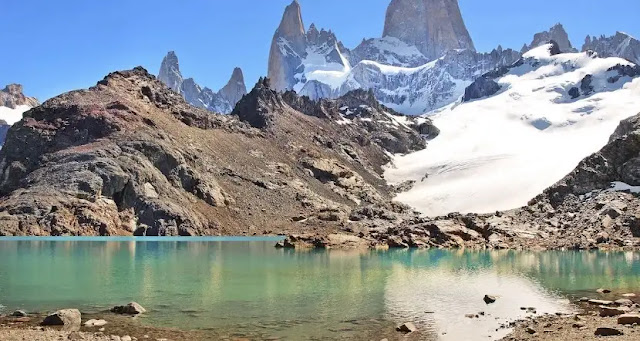 The height of the Fitzroy Peak is only 3,405 meters. Although the altitude is not high, it is very steep. It is a mountain that is difficult to climb from the climbing technology. The other side is the Torre Peak, one of the world's most famous granite towers.

El Calafate is the southernmost town in the Patagonia region, with a population of less than 10,000 and a world heritage glacier park. The town is known for its Argentine Glacier National Park, and 47 of the parks are glaciers originating in the Patagonian icefields, with a park ticket of 330 pesos.

The glacier and the Argentino Lake are absolutely picturesque. The Argentine Lake is not only a freshwater lake, but also a glacial lake. The water is pure. When the sky is blue, the lake surface will show a light blue color. There are many animals on the lakeside, such as horses and flamingos.

South of Patagonia is the island of Tierra del Fuego, and the beautiful glaciers can be seen on Tierra del Fuego. In the summer, there is a constant stream of tourists. Not far from the Strait of Magellan, you can see penguins there.

Mentioning Patagonia, one has to mention the Andes, the longest mountain range in the world, the world's highest extinct volcano, known as the "South American spine". In the natural beauty of Patagonia, the Andes are also a beautiful landscape.